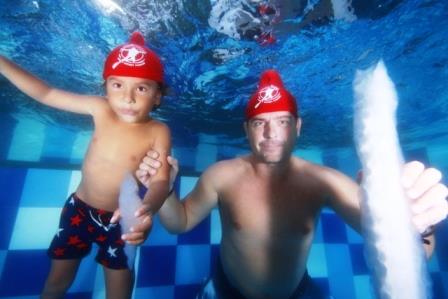 As Santa Klaus is visiting Poland tonight, it was a good time to reflect on Diving Indo’s multicultural, multi-national team with a variety of religions and traditions.

Bali is predominantly Hindu.  The Balinese follow the Pawukon Calendar which is 210 days and the Saka Calendar it is based on the phases of the moon.  The Balinese Hindu festival of Nyepi, the day of silence, marks the start of the Saka year.

Some of our guys come from neighbouring islands which are Muslim like the majority of Indonesia. The Islamic calendar is a lunar calendar consisting of 12 months in a year of 354 or 355 days.  Months begin when the first crescent of a new moon is sighted. Since the Islamic lunar calendar year is 11 to 12 days shorter than the solar year, Muharram (the beginning of the New Year) migrates throughout the solar years.

Christianity and Catholicism is also in the mix with some of our local Balinese staff, staff from neighboring Flores (the island was originally colonized by the Portuguese) and European staff, but there are still differences in the days celebrated.  As Mario is Polish, Santa Klaus visits tonight on the 6th of December, whereas in Marianne’s English childhood, Santa Claus visited on the night of the 24th of December (perhaps that’s why he could visit every kid in the world, he had a split shift!)
Much of Europe celebrates Christmas on Christmas Eve the 24th of December whereas England celebrates Christmas on the 25th of December.  At least the New Year following the Gregorian calendar is always on the 1st of January!

Unless of course you are Serbian like Branko and follow the Julian calendar when Christmas day is on the 7th of January and New Year is on the 14th of January.
So throughout the year the Diving Indo team celebrates no less than 4 New Year’s based on 5 different calendars! Happy New Year everybody!
To find out more about Diving Indo and our team check out About Us!
Photo Mario and Leon getting ready for Santa Klaus.
Bali dive teamBali divingChristmasNew Yearscuba Bali

Mantis shrimp have the world’s fastest punch!
Scuba diving with Triggerfish in Bali
Want the best diving in Bali? Let us arrange your diving holiday
How to deal with seasickness on diving trips
Scuba addict? Here’s why you will love diving in Bali