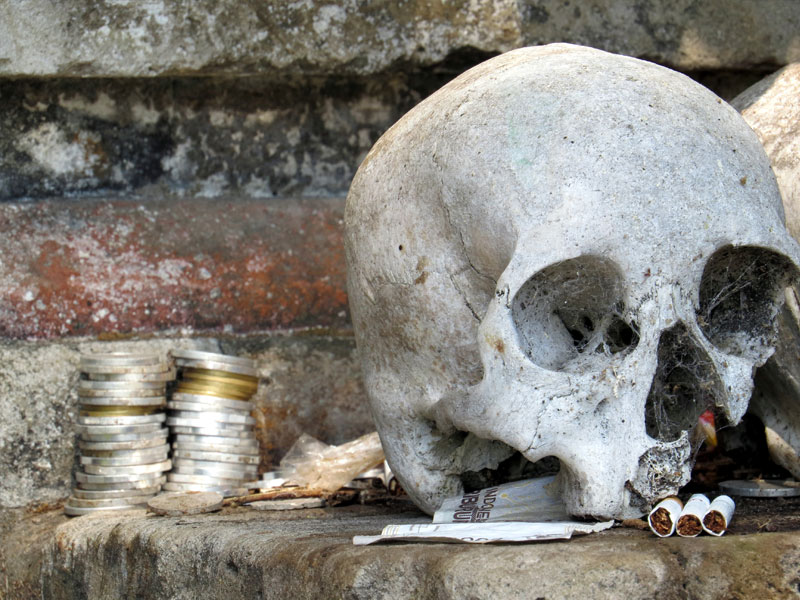 On the banks of the magnificent Lake Batur with a backdrop of the stunning Mount Batur volcano is the village of Trunyan, which is inhabited by a community, called ‘Bali Aga’ (Old Bali). The villagers follow a traditional life with Neolithic customs and avoidance of outside influences. This community are descendants of the original Balinese, who predate the arrival of the Hindu Majapahit kingdom in the 16th century. The village of Trunyan boasts the famous temple Puser Jagat, meaning Navel of the Universe; it sits in the shade of a large banyan tree, which is said to be more than 1,100 years old.
Accessible only by boat is the mysterious cemetery at Kuban.  Balinese Hindhu traditions means when a person dies their body must be cremated to allow the spirit to travel to the next life. In Trunyan this tradition is not practiced, here they lay their dead out in bamboo cages to decompose. You would think that these decomposing bodies would create an unbearable stench, but strangely there is no smell, it is masked by the perfume of the huge Taru Menyan tree growing in the cemetery. Taru means ‘Tree’ and Menyan means ‘Nice Smell’ and the name of the village of Trunyan is derived from these words.
The cemetery itself is flagged with skulls which are adorned with money, cigarettes and other offerings.  The bamboo graves are marked with a photograph of the deceased and personal possessions are place around the cages.
The women from Trunyan are prohibited from going to the cemetery when a dead body is carried there. This follows the deeply rooted belief that if a woman comes to the cemetery while a corpse is being carried there, there will be a disaster in the village, for example a landslide or a volcanic eruption. Such events have been frequent in the Trunyan’s history as the village is on a lake on the crater rim of a volcano.
Diving Indo visits the cemetery at Kuban as an optional extension on our Kintamani tour, to find out more details on this tour, check out our land trips page
#PADIBali cultureBali land toursBali land tripsBali toursBali traditionsTrunyan