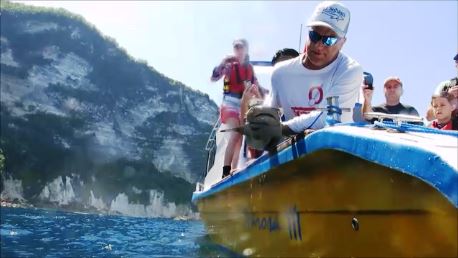 About a year ago Zero Gravity Diving approached Diving Indo with their idea to assist Bali Sharks to release sharks back into the marine protected waters of Nusa Penida.

Wanting to find out more and to be reassured that Bali Sharks was not ‘creating a demand’ for the capture of juvenile sharks, Diving Indo talked to Paul Friese of Bali Sharks. Paul buys sharks from local fishermen too small to fend for themselves, and pays the fisherman the same amount of money the fisherman would normally be able to get for the meat at the local market. Paul then raises the sharks until they are a size that they have a chance of survival in the ocean.

With this reassurance Diving Indo were happy to collaborate with Zero Gravity Diving and Bali Sharks to assist with the shark release when the sharks are mature enough.

Prior to the 4th of March this collaboration successfully released 4 sharks over 2 events at Nusa Penida.

On the 4th of March 2017 we had the 3rd shark release and the 2nd visit from UWC South East Asia (UWCSEA) who are a member of the UWC movement. UWC schools, colleges and programs deliver a challenging and transformative educational experience to a diverse range of students, inspiring them to create a more peaceful and sustainable future.

This time there were 15 children aged 7-8, 15 parents and 4 teachers.  The day started with a presentation on protecting the coral reef and what each student can do personally to help the marine environment.

With a team of 3 boats we picked up the two sharks for the shark release by Bali Sharks.  These 2 whitetip reef shark we saved by Bali Sharks from a small tank in a Bali restaurant. Next stop was Nusa Penida Island which is a marine protected island and therefore we could be sure that the sharks would not be re-fished. Both sharks were soon swimming away in the crystal blue waters of Nusa Penida, back in their natural environment.

After the shark release and a presentation on mantas we took the kids, parents and teachers snorkeling at Manta Point where at one stage there were seven manta rays swimming together just meters underneath us.  A dream come true for many children and adults alike.

Lunch at Crystal Bay and some more snorkeling, but the surface current that day was strong so cut the time short.  Still, it gave more time for the afternoon activities, swimming with sharks and being trash heros!

Bali Sharks has Shark Island in Sanur, a 10 x 10 meter compound dedicated to housing sharks in a controlled and safe manner.  This shark nursery provides a safe haven for sharks to grow until they become a size that they can fend for themselves. But the really cool thing for the kids is that they can snorkel with the sharks here.

Because of the size of the pontoon it was not possible for all children and parents to snorkel with the sharks at once so the group was split in two and half swam with the sharks while the other half collected floating trash from the ocean.  Everything from tin lids, bottle caps, cigarette butts, polystyrene, plastic bags and even a flip flop were found. A great end to a very exciting day.

If you want to read more about Bali Sharks, the conservation projects and shark releases, check out http://www.balisharks.com/media.html