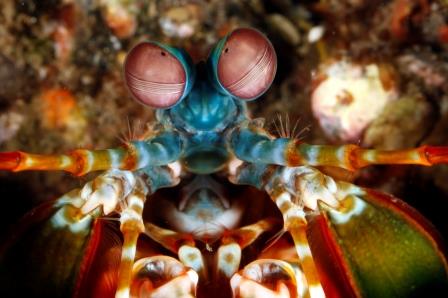 The mantis shrimp is incredibly photogenic with its incredible eyes and peacock coloured body it’s a perfect subject for underwater photography if you can catch them out of thier hole.  But they dont just look beautiful, they have some amazing unusual features. 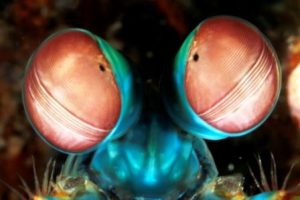 The amazing eyes of a mantis shrimp

The eyes of a Mantis shrimp are mounted on mobile stalks and can move independently of each other. They can see objects with three different parts of the same eye, giving them ‘trinocular vision’ so unlike humans who perceive depth best with two eyes, these animals can do it perfectly well with either one of theirs.

Their colour vision far exceeds ours too. The middle section of each eye, the midband, consists of six parallel strips. The first four are loaded with eight different types of light-sensitive cells (photoreceptors), containing pigments that respond to different wavelengths of light. With these, the Mantis shrimp’s visible spectrum extends into the infrared and the ultraviolet.

The fastest claw in the west!

Mantis shrimp come in a variety of species around 400. Stomatopods from different species range in size from smaller than an inch to longer than a foot. 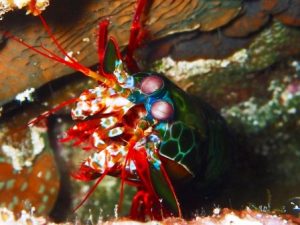 They’re usually classified by murder method — either smashing or spearing. Spearing Mantis have two sharp appendages on the front of their bodies built for harpooning prey. Spear-wielding Mantis shrimp don’t move as fast as their club-fisted counterparts (their strikes are about 10 times slower), but the threat of death by impalement is intimidating on its own.

The Smashing Mantis are famous for their powerful forearms, which can throw the fastest punch on the planet up to 50 miles per hour. The arm can accelerate through water at up to 10,000 times the force of gravity, creating a pressure wave that boils the water in front of it, and eventually hits its prey with the force of a rifle bullet. So watch out for your camera lens when scuba diving!

The life of a Mantis shrimp isn’t all cold-blooded killing. Some species of stomatopods are known to engage in the rare practice of social monogamy, a behaviour that’s especially remarkable among crustaceans. This means they will choose one partner to share food, shelter, and raise offspring with over the course of a lifetime.  They typically live for 3-6 years but some have been known to live for as long as 20 years

These photogenic creatures can be found at most sites especially diving the Blue Lagoon and the Jetty at Padang Bai, Bali

Photo thanks to Uwe Jacobs and Hadi

Holiday of a lifetime Bali
Traditional Kecak Dance in Bali
Scuba diving with Triggerfish in Bali
Want the best diving in Bali? Let us arrange your diving holiday
Why become a PADI Divemaster in Bali?