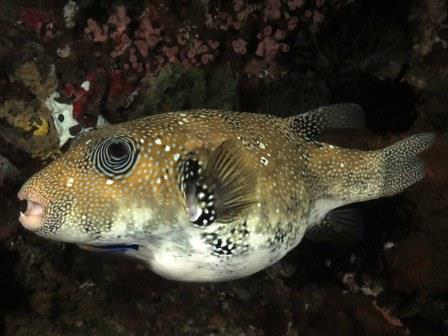 The Pufferfish (Tetraodontidae) belongs to the family of Tetraodontiformes. The family comprises numerous species that are known as puffers, pufferfish, blowfish, globefish, toadies, honey toads, bubblefish, and balloonfish, sea squab, and sugar toads. There are more than 120 species of pufferfish worldwide. Most are found in tropical and subtropical ocean waters, but some species live in brackish and even fresh water. They have long, tapered bodies with bulbous heads. Some wear wild markings and colors to advertise their toxicity, while others have more muted or cryptic coloring to blend in with their environment.

They range in size from the 1-inch-long (2.5-centimeter-long) dwarf or pygmy puffer to the freshwater giant puffer, which can grow to more than 2 feet (61 centimeters) in length. They are scaleless fish and usually have rough to spiky skin. All have four teeth that are fused together into a beak-like form.

The diet of the pufferfish includes mostly invertebrates and algae. Larger pufferfish will even crack open and eat clams, mussels, and shellfish with their hard beaks

The puffer fish has a unique reproduction method. The females lay eggs at the shore after the males have pushed them to a certain place. These are spherical in shape and usually float on the surface because of their weight. The babies usually hatch within a week.

Pufferfish have a slow clumsy swimming style makes them vulnerable to predators, so defend themselves use their highly elastic stomachs and the ability to quickly ingest huge amounts of water (and even air when necessary) to turn themselves into a virtually inedible ball several times their normal size. Some species also have spines on their skin to make them even less palatable.

While there isn’t a particular number of times that a puffer can inflate in its lifetime, it is a stressful process. They are unable to inflate repeatedly due to fatigue

Fugu is very dangerous type of Japanese food made from the pufferfish, which can be potentially deadly if not prepared correctly. Fugu is ripe with a very strong neurotoxin called tetrodotoxin, which is one of the world’s most powerful toxins and is 1,200 times more poisonous than cyanide. Tetrodotoxin shuts down electrical signaling in nerves. While conscious, the victim undergoes muscle paralysis and is unable to breathe, resulting in asphyxiation. The most poisonous parts of fugu are the liver, the roe, or the eggs, the ovaries, and the intestines of the pufferfish

In order to serve fugu on the menu, Japanese restaurants must adhere to very strict rules and guidelines concerning its preparation. Chefs must undergo between two to three years of intense training to be allowed to prepare fugu in a restaurant.

Between 2005-2014 in Japan, there were 11 deaths from eating Fugu and 359 people were treated as fugu poisoning. That’s why pufferfish should be left in the sea, not served on a plate!

Diving in Bali with pufferfish – there are many different species that can be found in Bali from the tiny Pearl Toby’s to the huge map puffers. See Diving Indo’s diving day trips for more details.

Traditional Kecak Dance in Bali
Mantis shrimp have the world’s fastest punch!
Scuba diving with Triggerfish in Bali
Want the best diving in Bali? Let us arrange your diving holiday
Why become a PADI Divemaster in Bali?