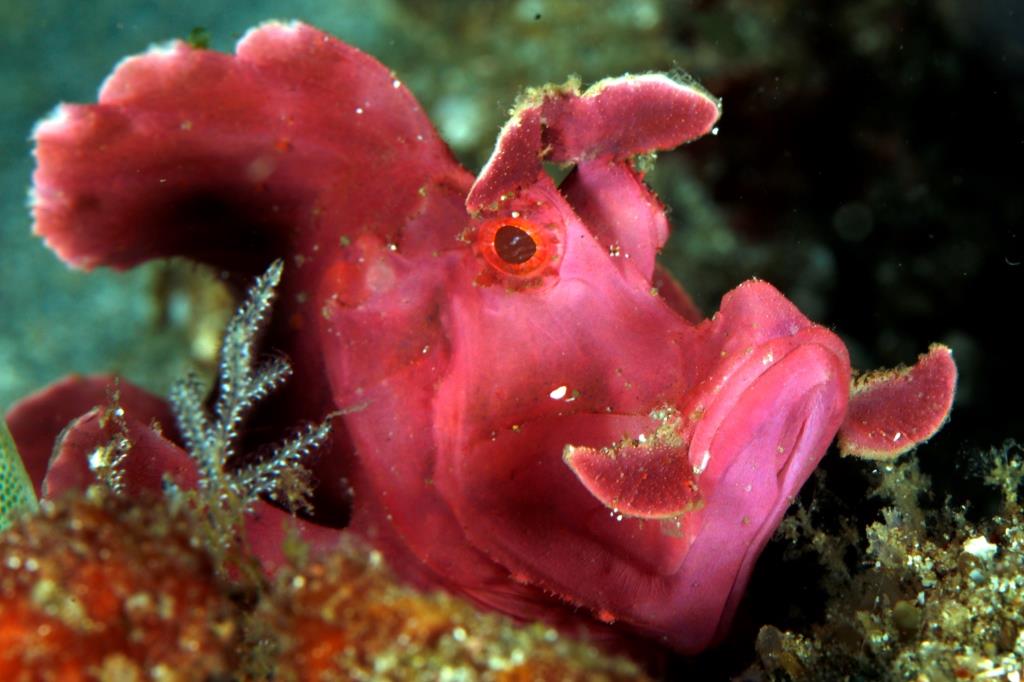 Rhinopias – on the bucket list of every underwater photographer

Rhinopias are much sought-after fish for underwater photographers due to their scarcity, unusual shape, and beautiful range of colours. Real photo addicts will visit a location just to photograph them. There are 6 species but only 3 commonly found in South East Asia. The Rhinopias argoliba is only found in Japan, Rhinopias xenops in Hawaii and Rhinopias cea on Easter Island. The more common species are Rhinopias aphanes, Rhinopias eschmeyeri and Rhinopias frondosa, known as the Lacy, Paddleflap and Weedy scorpionfish.

The word ‘rhinopias’ comes from the Greek word for nose (rhino) and ‘ops’ meaning ‘appearance’.

They belong to the scorpionfish family and adopt the same sort of camouflage to their surroundings as other scorpionfish do, as defence mechanism, but also to make feeding easy, they just sit and wait for fish and crustaceans to come within easy reach and will eat almost any fish which will fit in its mouth. When disturbed they raise the venomous spines along their backs.

They can change colour

They shed their outer skin layer to get rid of algae and parasites and they change colour, I watched a vibrant cerise pink lacy rhinopious change to a boring yellow colour to match its mate over a series of a month of dives at the same site.

Hopping is preferred to swimming

They can swim if they really have to but tend to use their fins to walk slowly across the seabed or ‘hopping’ by pushing off with their pelvic and pectoral fins rather than swimming. But on a night dive they are attracted by the torch light using it for easy hunting and seem to jostle for the limelight, a great time to take underwater photographs! 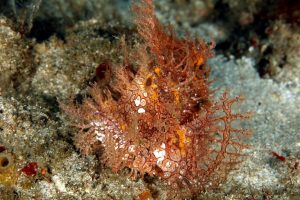 The Lacy Scorpionfish can be recognised by its distinctive head shape, the large upturned mouth, dangly tentacles (filaments) on the snout and the species varies in colour from yellow to brown, purple, green or black and is covered by a maze-like pattern.

The Weedy Scorpionfish found in white, yellow, purple, red and all manner of other colours. It has circles rather than lines covering the body. 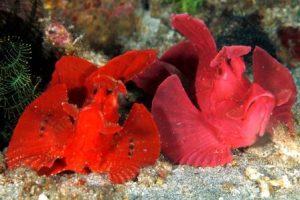 The Paddleflap Scorpionfish has skin like flaps above its eyes and on either side of its mouths resembling giant eyebrows and moustache. They are one uniform colour without filaments.

The best place to find Rhinopious scuba diving in Bali is Padang Bai. So grease your o-rings and come and join us on our diving trips.

Holiday of a lifetime Bali
Traditional Kecak Dance in Bali
The frogfish, the master of disguise
Mantis shrimp have the world’s fastest punch!
Scuba diving with Triggerfish in Bali