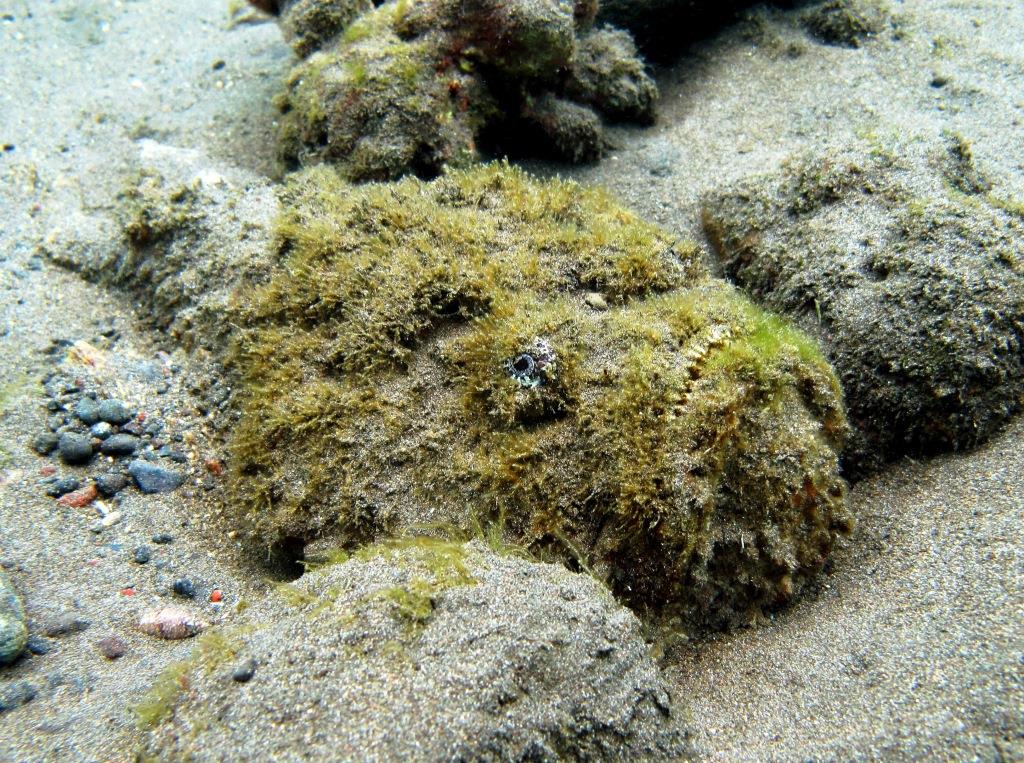 Stonefish – the world’s most venomous fish

Stonefish are venomous which means that can deliver toxins rather than poisonous which is where the toxin is stored within the flesh with no way to deliver it. It is only ingesting poisonous animals that can prove fatal such as Fugu (pufferfish). However standing on a stonefish will definitely ruin your day!

Stonefish are members of the order Scorpaeniformes, which includes other well-known venomous species such as scorpionfish and lionfish. The main way to tell a stonefish from a scorpionfish is the stonefish has a downturned mouth.

Their powerful sting comes their 13 dorsal spines, each one equipped with two venom sacks containing potent neurotoxins and stiff enough to penetrate boot soles. Stings are both potentially lethal and extremely painful. Once stung, the victim will feel severe pain, shock, and localised tissue death. Luckily, the venom is treatable if immediate first aid is given, which involves submerging the wound in hot water as this will destroy the venom, and anti-venom is available for severe cases.

The stonefish is a solitary fish for the majority of its lifetime. However during the mating season they do meet the opposite sex for spawning. The female releases it’s eggs on the bottom of the sea floor creating a layer of unfertilized eggs. Then the male comes and fertilized the eggs by releasing the sperm over them. The eggs of the stonefish’s are fairly large which means that the newborns are hatched well developed.

Their common name derives from thier ability to camouflage itself with a grey and mottled color similar to the color of a stone. These masters of camouflage are ambush predators, which means they hide on the bottom and wait for their prey to come to them. They wait for prey either fish or crustacea to swim past, and then strike with incredible speed. They can be sitting on top of the reef, buried in the sand with only their face showing, or even sitting in very shallow waters and in sea grass meadows. This one was in the rubble only 5 meters deep at The Pyramids, Amed, Bali.

Check out our fun diving trips to Tulamben and Amed