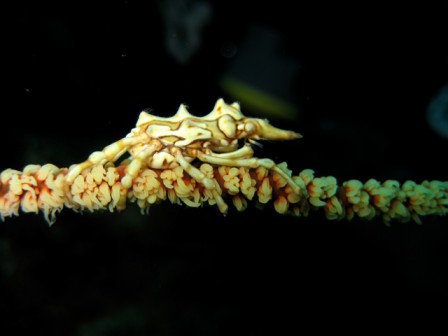 Next time you spot a whip coral, usually found in deeper water but can be as shallow as 10m, have a look at the surface of the coral to see a variation in texture.  If you spot this, it will probably be a whip coral shrimp (Dasycaris zanzibarica) as they are perfectly camouflaged with the coral’s colour and polyp structure.
Whip Coral shrimp hardly ever move from their whip coral, so once you have spotted them once, you will able to find them again in the same residence.  They also commonly hang out in pairs with the female twice as large as the male up to 1.5cm in length.
These cute little shrimp are also known as Carid Shrimps, Commensal Shrimps, Sea Whip Coral Shrimp, Whip Shrimp and Wire Coral Shrimp. They feed on parasites, algae and plankton and are only found on black coral (Cirripathes).  In fact black coral is not black, with colours ranging from yellow to red passing through blue and green, but these species possess a dark skeleton that is characteristic to every black coral.
They don’t tend to move much as well, so perfect for macro photography.  Here is a great link for some tips and trick for getting the perfect photo of the Whip Coral Shrimp.
Photo thanks to Uwe Jacobs
#myPADIBali divingBali scubaBali scuba divingscuba Baliscuba diving BaliShrimpWhip Coral

Mantis shrimp have the world’s fastest punch!
Scuba diving with Triggerfish in Bali
Want the best diving in Bali? Let us arrange your diving holiday
Why become a PADI Divemaster in Bali?
How to deal with seasickness on diving trips