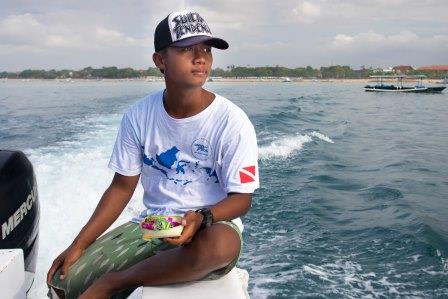 Offerings to the Gods

When you visit Bali you will quickly notice the ceremonies, rituals and offerings that take place all around you on a daily basis. Its religion is one of many things that make Bali distinct from the rest of the country. Whilst Indonesia is mainly a Muslim country, the majority of Balinese people practice Balinese Hinduism – a mix of Hinduism, Buddhism and animism.

The Balinese believe that the spirit of the gods is present in all things, from everyday objects to nature. For example, they believe that good spirits can be found in the mountains, whereas the spirits of the sea are demons and ogres. Mount Agung, the highest mountain in Bali, is considered very sacred because it is the home of the gods.

For this reason Balinese follow a ritual of ‘giving back what has been given to you by the Gods’. Offerings appease the spirits and bring prosperity and good health to the family. The Balinese Hindhus do this in the form of an offering to the gods, consist of a basket, which is made of palm leaves pinned together with small bamboo pins. Inside there is always areca nut, betel nut and lime. The colours of these things are important because they represent Brahma, Shiva and Vishnu – the three gods of the Hindi trinity.

Inside the offering can also be found rice, flowers and other small food items such as peanuts or rice crackers. Special hand gestures and prayers are made as the offerings are placed.

For this reason every time we go to Nusa Penida diving or snorkelling, an offering is placed by the crew into the sea to assure safe passage. Pictured here is Krisha just about to perform the offering ceremony.

Photo thanks to Anya