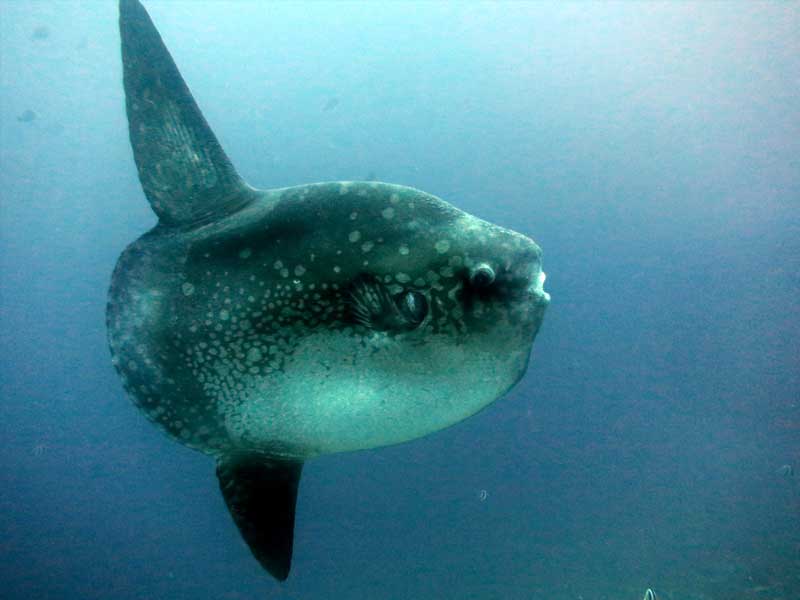 One of the biggest attractions of Bali scuba diving is the Mola Mola (Ocean Sunfish). The season here to spot them is between July and October.
Ocean sunfish, or Mola Mola, look like the invention of a mad scientist. Huge and flat, these silvery-grey fish have tiny mouths and big eyes that vanish into an even bigger body with a truncated tail. They develop their truncated, bullet-like shape because the back fin which they are born with simply never grows. Instead, it folds into itself as the enormous creature matures, creating a rounded rudder called a clavus. Mola in Latin means “millstone” and describes the ocean sunfish’s somewhat circular shape. They are a silvery colour and have a rough skin texture.

The Mola Mola are the heaviest of all the bony fish, with large specimens reaching 14 feet (4.2 meters) vertically and 10 feet (3.1 meters) horizontally, they can be as tall as they are long when their dorsal and ventral fins are extended. They can weigh nearly 5,000 pounds (2,268 kilograms).
A member of the order Tetraodontiformes, which also includes pufferfish, porcupinefish and filefish, the sunfish shares many traits common to members of this order. It has since been given its own genus, Mola, with two species under it.

Inside a Mola Mola’s mouth are two pairs of hard teeth plates shaped with a slightly curved ridge that look kind of like a bird’s beak and they are unable to fully close their relatively small mouths. Molas eat mainly jellies, from big moon jellies to tiny comb jellies.
To break their dinner into manageable pieces they don’t chew; they suck the jellies in and out of their mouths until they’re reduced to gelatinous chunks. It’s thought that molas can enjoy this potentially painful diet because of a mucus-like lining in the digestive tract that keeps them from getting stung. The Mola Mola also sometimes eat squid, fish, crustaceans, sponges, brittle stars, and odd seafloor creatures called crinoids.
They are harmless to people, but can be very curious and will often approach divers.

Females of the species can produce more eggs than any other known vertebrate. Molas hatch from tiny eggs but grow to weigh more than a pickup truck, increasing in size 60 million times along the way. Sunfish young resemble miniature pufferfish, with large pectoral fins, a tail fin and body spines.

Mola Mola can become so infested with skin parasites, they will often invite small fish or even birds to feast on the pesky critters. They will even breach the surface up to 10 feet (3 meters) in the air and land with a splash in an attempt to shake the parasites.
They are frequently seen basking in the sun near the surface and are often mistaken for sharks when their huge dorsal fins emerge above the water.

Their population is considered stable and adult Mola Mola are vulnerable to few natural predators, but sea lions, orcas and sharks will consume them. Sunfish are frequently, though accidentally, get snagged in drift gill nets and can suffocate on sea trash, like plastic bags, which resemble jellyfish.
Mola Mola can be seen at Nusa Penida and Gili Tepekong/Mimpng in season.  Check out our Bali diving day trips for more details
#PADIBali divingBali scuba divingdiving BaliMola MolaNusa Penidascuba BaliSunfish