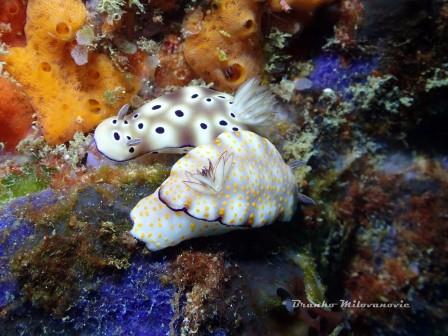 Nudibranch – The Tiffany Eggs of the Sea

The colourful and varied Nudibranch are a macro photographers dream.  Basically they are sea slugs, but unlike common drab coloured land slugs, these slugs come in a huge range of colours, patterns, shapes and sizes, with over 3000 species identified.  They are known as the Tiffany egg of the underwater world.

The physical forms of nudibranchs can be vastly different but most commonly they grow to between 4-10 cm in length.  The Spanish Dancer can grow to as much as 60 cm in length and weigh as much as 1.5 kg!
Their scientific name, Nudibranchia, means naked gills and describes the feathery gills and horns that most wear on their backs.  So basically they have their lungs outside their body and their anus is in the middle of their lungs!!! Almost all nudibranch have a rasp-like tongue called a radula in their mouth cavity to scrape their food and a fleshy ‘foot’ that propels them forward by muscular contractions.
Nudibranch have Rhinophores which are scent or taste receptors on their head.

In all nudibranchs, the male and female sexual openings are on the right side of the body.  All nudibranchs are simultaneous hermaphrodites enjoying all the best parts of being male and female at the same time (or maybe the worst parts of both).  As opposed to many other animals where only a percentage of encounters would result in some funky fun time, any rendezvous with another slug can be fun.  During sex both sea slugs will give and receive, give and receive and give and receive some more.  However to make this work nudibranchs must continuously produce eggs and sperm.

Nudibranchs are carnivores and eat sponges, anemones, barnacles and sea slugs and their eggs. Occasionally they have been known to feed on members of their own species too!!  Some nudibranchs are solar-powered, storing algae in their outer tissues and living off the sugars produced by the algae’s photosynthesis. How cool is that?

Often they are able to take on the colour of their preferred prey, such as brightly coloured sponges, this can also serve as camouflage. As defence some nudibranchs can emit chemical odours to deter predators, others exhibit bright or striking colours as a warning to predators that they are toxic. One marine biologist friend said that the coloured dots around the skirt of the nudibranch body taste like sulphuric acid.  I took his word for it!

Once you get into spotting nudibranch it becomes addictive! And your Helmut Debelius Nudibranch field guide gets well-thumbed trying to find what you have spotted.
If you really love nudis then our 3 day macro package is the one for you with our eagle eyed Divemasters, taking you to all the best ‘macro’ or ‘muck’ dives in Bali
Photo thanks to Branko
#myPADI#PADIBali divingBali scubadiving BaliNudibranchscuba Baliunderwater photography