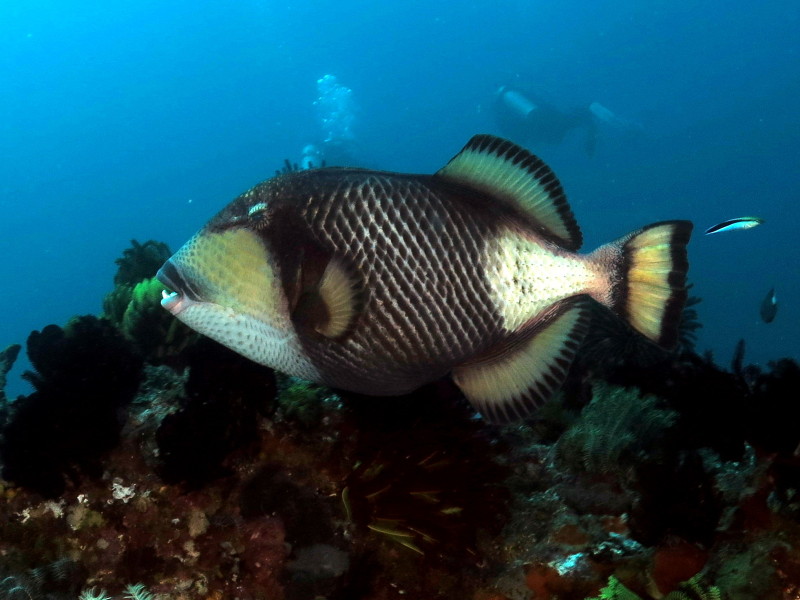 Scuba diving with Triggerfish in Bali 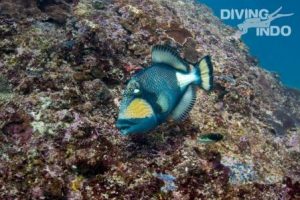 Triggerfish are bottom dwellers that dig out prey, such as crabs and worms, by flapping away debris with their fins and sandblasting with water squirted from their mouths, which is really cool to watch. They also use very tough teeth and jaws to take on sea urchins, flipping them over to get at their bellies, which are armed with fewer spines.

They wreak such havoc on less fortunate reef dwellers that smaller fish often follow them to feast on their leftovers.

Why are they called triggerfish?

There are 40 species which all have two moveable spines on top of the fish. When the larger forward spine is upright, the smaller one behind it (the trigger) can drop down, securing the first in place.

This is their defence mechanism (apart from their teeth!). They can swim into a hole in the reef just barely big enough to accommodate its body. Once inside, the fish erects its large spine, locks it in place with the second which wedges the fish tightly into its hiding place.

Watch out for the triggerfish nests! 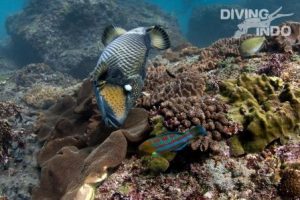 Triggerfish tend to be solitary but meet at traditional mating grounds according to timetables governed by moons and tides. The males of many species appear to establish territories on these spawning grounds and prepare seafloor nests that will house tens of thousands of eggs.

Females share care of the eggs until they hatch, blowing water on them to keep them well supplied with oxygen. In some species males are known to maintain a harem of female mates.

A fish with a bad attitude

Triggerfish are infamous for their nasty attitude and this behaviour is especially evident around nests, where intruders, no matter what size, are likely to be charged or bitten.

The nest is usually circular in shape and the territory extends upwards in the shape of a cone, which means ascending will put you further into its territory, making a horizontal swim away from the nesting area the best escape route when faced with an irritated fish.

Did you know that triggerfish can rotate each eyeball independently!

Holiday of a lifetime Bali
Mantis shrimp have the world’s fastest punch!
Want the best diving in Bali? Let us arrange your diving holiday
Why become a PADI Divemaster in Bali?
How to deal with seasickness on diving trips