Can you carry a scuba tank on your head?

marianne woodward   |   Bali Culture, Diving In Bali
One of the most famous diving shipwrecks in the world is the USAT Liberty at Tulamben here in Bali. Torpedoed in World War 2 the 120m long ship was beached at Tulamben until Mt. Agung (Bali’s biggest volcano) erupted in 1963, pushing it into the sea.  She has sat there for over 50 years and is an incredible divesite.
To read a complete history, check out our blog.
But apart from an awesome dive what makes this place very unique is the Diving Helpers Club.

The Diving Helpers Club was founded by Pak Kari Yasa in 1978, the club provides a porter service to all divers diving there anywhere from your hotel or car along the kilometer of beach which is home to 3 awesome shore dives. Each diver or dive centre pays them a small fee for this service. The income is then pooled and split equally at the end of each day, 20% goes to the club itself. The money accumulated by the club then pays for community based provisions such as new gamelan instruments (traditional Balinese instruments) and improvements to the banjar (community centre), so part of the money is shared by all.

The women carry the scuba tanks on their head!

The men of the Diving Helpers Club patrol the site in small boats to stop any illegal fishing, ensuring that the wreck stays home to over 400 species of fish.
The ladies of the Diving Helpers Club carry your equipment and scuba tanks on their head!  Often carrying two tanks at a time, not easy for most of us using our arms, but to have the balance of carrying on their heads is amazing, especially when the beach is pebbly and they are only wearing plastic sandals.

Some macho men get a little indignant when they see the women carrying the tanks. This is their job and you are going to pay for the porter service whether you carry your own tank or not. However helping them lift the tanks on to their heads is always appreciated. Please take out your integrated weights first and dangling pointy sticks as they can take an eye out.
They don’t mind you taking photographs of this amazing balancing act, so you will get some great topside photos as well as underwater shots.

The best wreck dive in Bali

As the USAT Liberty has sat underwater for over 50 years, she is covered in coral and fish.  The nutrients of the black volcanic sand make it home to some incredible critters such as harlequin shrimp, ghost pipefish and pygmy seahorse.  The colour of the sand makes a dramatic background favoured by underwater macro photographers. 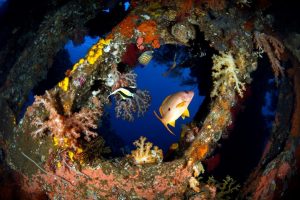