The frogfish, the master of disguise

Only a mother can love a frogfish, they are that ugly. I always thought when god was moulding animals out of playdough, he squished the playdough and then forgot about it, that’s how weird they look. But they are a scuba divers delight and fascinating creatures! 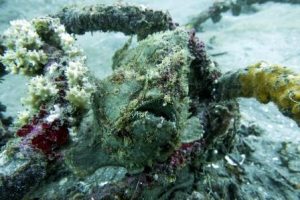 There are around 50 species of frogfish that belong to the anglerfish family. They come in all sizes and colours to blend in with their background of rocks, sponges or corals. They can actually change colour if their habitat changes but not instantly, it takes time.

Some frogfish have a front dorsal fin that looks like a lure or bait which they wiggle to attract their prey, while the rest of their body blends into the background. When the prey approaches they ambush their prey in milliseconds with a mouth that can extend up to 12 times their resting size. Puts a new meaning to biting off more than you can chew!

Frogfish have no swim bladder, so they can’t swim. They walk or hop awkwardly along the seabed. But when they need to move quickly they use jet propulsion by sucking in water and forcing it through their back facing gills.

Frogfish eat each other!

Males are smaller than females. The female releases eggs into the water for the male to fertilize, but if the male stays around too long after fertilization the female may eat him! 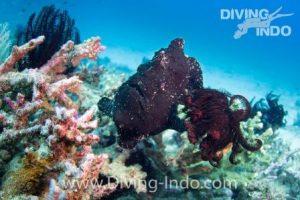 Black frogfish are hard to photograph

Apart from their mates, they eat mostly small fish but also shrimps and crabs, with their prey sometimes being up to twice their own body size. The frogfish swallows its prey whole as they don’t have any teeth, allowing digestive juices to do the rest.

If you have the help of an eagle eyed Diving Indo PADI Divemaster to help you spot them, frogfish can be found on many sites especially Seraya and the Jetty at Padang Bai.

And for the really keen macro photographer, have a look at our 3 day macro package that includes these scuba diving sites.